From 14-16 September a delegation from Cheltenham was invited to Annecy to commemorate the 75th anniversary of the crashing of a British bomber on the Pont de Tasset, near Annecy. 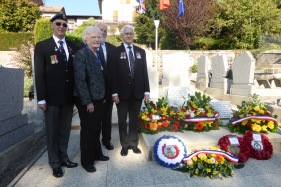 The delegation was led by the chair of Twinning and a former Mayor, together with representatives from the Cheltenham Branch of the Royal British Legion and Royal Air Force Association, who all laid wreaths on behalf of Cheltenham and its people in honour of the airmen of the RAF who lost their lives, and also in acknowledgement of the citizens of Annecy who died as a result of the crash.

The resistance cemetery and memorials at the plateau des Glieres, where 125 members of the Resistance were killed by invading German forces,  were also visited, as well as the Necropolis and resistance museum at Morette and the sites are a poignant reminder of some dark days in the shared history of Annecy and Cheltenham.   At the commemoration ceremonies young children participated in the laying of wreaths which was particularly moving and gives hope for the future.

Read a full report by Michael Bryant, Chairman Cheltenham Branch of the RAFA