Twenty three residents from Cheltenham celebrated over 30 years of friendship with its Chinese twin town of Weihai and 20 years since the two towns were officially ‘twinned’ during a recent 3 -day stay in the beautiful coastal city of Weihai.  Weihai, formerly called Weihaiwei, is a prefecture-level city in eastern Shandong province, China, and a major seaport. It borders Yantai to the west and the Yellow Sea to the east. 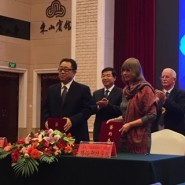 Memoranda of Understanding were signed by the Mayor of Cheltenham, the Mayor of Weihai and Judy Woodman, International Manager at Gloucestershire College on 19 October 2018 setting out closer future cooperation in the fields of education, sport, and promoting Cheltenham and the Cotswolds as a tourism destination to the Chinese market.

Highlights of the stay included visits to Weihai Ivy International School, which looks forward to developing links with Gloucestershire College and attracting overseas participants to its Summer Sailing School, and  Weihai Vocational School, which featured an impressive arts, crafts and textiles exhibition. 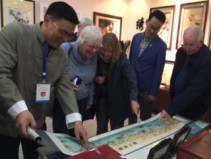 A visit to a silk shop and exhibition provided fascinating insights into this important Chinese tradition.

A visit by ferry to nearby Liugong Island was particularly special for Annette Walker and her son Sam where they were able to see the place of her mother’s wedding on 18 April, 1938.   Liugong Island was once an important navy base during the Qing Dynasty, and now a popular tourist destination.  With over nine miles of coastline, the island is home to the Sino-Japanese Museum, former residences and restored buildings of historical interest.

With 1,000 km of coast, Weihai boasts beautiful scenery, a temperate climate, and world-class seafood cuisine. Its slogan: East or West, Weihai is the best. For anyone interested in information on Weihai, the International Choir Festival or the International Triathlon taking place next year in Weihai, please contact the Twinning Officer.

From Weihai the group travelled with the bullet train to Beijing and spent two adventurous days visiting the Great Wall of China, the Forbidden City, the Temple of Heaven and other attractions, organised by Worlds Apart in Cheltenham in conjunction with China Links.