In July the Mayor welcomed over 50 pupils from our Chinese twin town of Weihai  who were in Cheltenham for 2 weeks.  There were two groups; one from the Ivy International School in Weihai

The second Weihai Yubo Group were attending a summer school programme organised by the British Study Centre  and stayed at the Cheltenham Ladies College.  We were delighted to see so many young people from Weihai who embraced the language and cultural differences with maturity and challenged the Mayor with some tough questions on Brexit and presented him with many gifts from China. 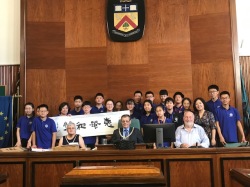